March, 2018: We have successfully transferred Masoud and Terez from illegal keeping at the Bulgarian Razgrad Zoo to their new home at FELIDA Big Cat Sanctuary. Due to the reluctance of local authorities to hand the lion cubs over to the care of FOUR PAWS, the on-site team was confronted with a tense situation given the serious health condition of one of the cubs. After mass protests against the transfer of the cubs to another substandard zoo, we eventually gained permission to transfer the cubs over a week later.

"We are very happy that the situation took a positive turn and that we could bring Masoud and Terez to species-appropriate surroundings. Given Terez' health condition, he urgently needs daily monitoring and a special diet to treat his maldevelopment. From now on, they can recover from their past suffering"

Razgrad Zoo opened in 1960 and is located in north-eastern Bulgaria. Although its license expired in 2014, the zoo remains open to visitors for free, and is financed by the unprofessional breeding and sale of lions. Currently, many animals of different species – including lions, deer, reindeer, llamas, foxes, hogs and birds – live in the illegal zoo. Since the city owns the zoo, FOUR PAWS convinced the mayor of Razgrad to intervene. At the end of last year, an international team of veterinarians provided medical care to all seven lions and sterilised two adult males.

In the past 2 years, Masoud and Terez have gone through a lot of developments. Thanks to intensive and specialised care, the expertise of our wildlife veterinarians and the support of our donors, the cubs have grown into young adult lions! Although we still call them ‘our cubs’, their mane are growing, they already have an impressive roar and they are over 120 kilos! Aren’t they just gorgeous?

Although Terez became stronger over the years, Masoud did not: we saw his neurological problems worsen and his motor skills deteriorating. We therefore brought Masoud to the University of Utrecht for a thorough MRI and CT scan. The results confirmed our fears: Masoud suffered from a very complex, malformed spine which was a congenital defect due to inbreeding. The condition had progressed to a point where it was causing Masoud severe pain and would cause him even more pain while growing further into adulthood.

After thorough consultations with the neurological specialists and wildlife veterinarians it became clear that that this condition could not be surgically treated or improved in any other way and that pain medication was not effective any longer. When there is no hope for improvement, preventing suffering is the last part of the care we can provide to the animals we rescued and therefore we had to say our final goodbyes to Masoud in the end of July, 2020.

The loss of his brother has an impact on Terez and we therefore keep a close eye on him and are giving him extra attention.

Only ten months after saying farewell to Masoud, we are struck with grief again. We had to say farewell to our beloved Terez, who has been reunited with his brother and left us brokenhearted.

The lion brothers arrived at FELIDA Big Cat Sanctuary in February 2018. They were just 5 months old and weighed only 20 kilos each. So young and already so sick, both suffering from severe neurological problems after being born as a result of inbreeding in an illegally operating Bulgarian zoo. The cards they were dealt with meant never-ending health challenges.

We gave them intensive specialised care, maximising their chances to enjoy, play, relax and have other positive experiences. And despite their ailments and within their own limitations, the brothers enjoyed life and grew up to be happy, enthusiastic and sweet lions. But not for as long as we had hoped. Last summer the medical condition of Masoud progressed to a point where pain could no longer be avoided, and we had to let him go. Not much later it was confirmed that Terez, who already had the same neurological problems in a less advanced stage, was suffering from deteriorating kidney function. Kidney failure is common, especially in older felines, but for younger animals with a difficult start in life this can develop earlier. A few weeks ago his kidney failure caught up with him.

Every possible measure was taken but we saw Terez weaken, and after thorough consultation, it became clear that there was no way Terez would recover. Despite his young age, we saw him give up. He seemed to simply lack the energy to keep fighting his failing body. When there is no hope for improvement, ending suffering is the last part of the care we can provide to the animals we rescue. It is the most difficult part of our work, but crucial to ensure animal welfare.

Our hearts are in pieces, again. We know Terez will be missed by so many people who made his rescue possible. We are forever grateful to have been a part of that. We hope Terez felt the love and care that was there for him, that it showed him humans can be better. Farewell Terez, you will not be forgotten. Whatever awaits you now, we are sure it is together with Masoud.

Home to many big cats

The lion cubs will temporarily live at our FELIDA Big Cat Sanctuary, which is located in the Dutch town of Nijeberkoop. By taking over the project in 2014, we also assumed responsibility for the big cats that were already housed there at the time. As FELIDA was primarily intended to serve as a transit and rehabilitation sanctuary, we moved most of the wild animals to our Big Cat Sanctuary LIONSROCK in South Africa. Six other tigers, including the two young tigers we rescued from Syria, live in the Dutch Big Cat Sanctuary. Most of them are too old or weak to be transferred. In the future, we plan to relocate the facility so that even more big cats can be rescued from poor keeping conditions and placed into large close-to-nature enclosures.

Our FOUR PAWS rescue sanctuary for big cats in the Netherlands 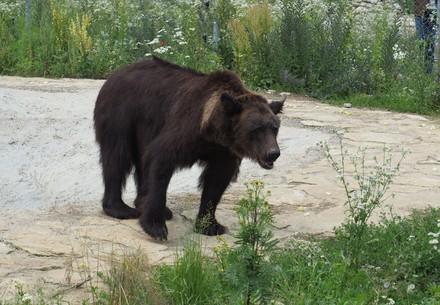