In Cambodia, the suffering of dogs and cats is immense. There are several problems:

Despite being known for its magical temples and exotic cuisine, Cambodia remains one of the poorest countries in Asia lacking any type of animal welfare legislation protecting companion animals. Rabies is also a significant threat in the country, killing over 800 people a year.

There is a common misconception that unwanted animals can be abandoned at Buddhist temples (called pagodas in Cambodia) because they will be cared for by the monks.  While animals may be provided with a bit of rice and leftover scraps, most die from malnutrition and disease.  Unwanted kittens are frequently born into a miserable life at the pagodas. Much of this suffering could be prevented through simple education, as most local people just don’t know how to provide care for these animals.

The fallout from Covid-19 continues to be felt around the world and stray dogs and cats are victims too. FOUR PAWS was recently advised of a pagoda in Siem Reap, Cambodia, where a kind-hearted monk was feeding many stray dogs and cats. At Kesaram pagoda, a safe haven for stray and unwanted animals, the monk, Stevid John, is caring for around 20 dogs and 40 cats and kittens. However, the pandemic and lack of tourists has hit hard and, unable to afford food for all the animals relying on him, he had resorted to selling recyclable bottles and other items, in a desperate attempt to raise funds.

FOUR PAWS stepped in and we are now providing a regular supply of dog and cat food. However, we also noticed that many of the dogs and cats at the pagoda were in desperate need of medical treatment. Stevid John advised us that many kittens had been dumped at the pagoda and some were sick. They also needed to be vaccinated and de-wormed. Some of the pagoda dogs had developed skin problems. They were scratching and covered in sores. Many of the animals needed to be sterilised.

FOUR PAWS has committed to providing medical treatment, including deworming and vaccination, to these deserving animals and to sterilise them to prevent more unwanted dogs and cats being born into suffering. Once the animals are sterilized and healthy, they can be promoted for adoption. Kesaram pagoda is one of many in Siem Reap that are overwhelmed with animals and urgently need food, medical care, and sterilisation services. At most of these facilities, monks and nuns are doing their best with very limited means. In particular, many pagodas are home to cats that urgently need to be sterilised to prevent more kittens being born. FOUR PAWS is working hard to visit and support as many pagodas as possible during the strict travel lockdowns in the region, to ascertain which are in need of urgent support. We are currently reviewing a shortlist with large numbers of animals needing immediate help.

Driven by poverty and the belief that dog meat has medicinal properties, the dog and cat meat trade is rampant throughout the country. Dogs and cats living at pagodas are frequently targeted for the trade, which is brutal and the suffering involved in it is unimaginable. Stolen animals, many of them former pets, are trafficked in cages or sacks in which they are killed, often by drowning. Dog and cat meat is sold at roadside stalls under the name ‘special meat’. It’s increasing in popularity throughout Cambodia, particularly among tourists visiting the country. The dog meat trade is extremely dangerous to public health, given the high prevalence of rabies in the country. Read more about The Dog and Cat Meat Trade.

Elsewhere in Siem Reap, FOUR PAWS is funding an adoption centre, housing 31 dogs rescued from the dog meat trade. The rescue came about in February 2021, when the Cambodian authorities intercepted a truck carrying 61 dogs to slaughter. The dogs were terrified, packed on top of each other in tiny crates. They had been travelling for hours with no access to water, unable to move and barely able to breathe.

Following their rescue, they were provided with water, emergency medical treatment, and food, and transported to a donated facility that would become their home until permanent homes could be found. The centre is staffed by a core team of workers who dedicate their time to feeding, caring for, and socialising these dogs, many of whom are still traumatised by their experience. The adoption centre is in desperate need of equipment, including a washing machine and freezer, as well as items like stainless steel tables and chairs and basic medical and grooming tools. In addition, a number of repairs need to be carried out at the facility to make it fit-for-purpose, including tiling the floors in the dogs’ accommodation, painting, and basic DIY. The intention is to operate this adoption center and potentially rescue more dogs throughout 2022 which will also require funding and resources.

30 of the original 61 rescued dogs have now been adopted, both locally and internationally, but 31 remain in our care. Attempts at rehoming the dogs locally have been hampered by Covid-19 lockdowns, but for 15 lucky dogs, it now looks like rehoming in Europe may be possible. The logistics of this operation will be significant, including medical tests, paperwork, and transport costs.

Through partnership, FOUR PAWS is all about building the capacity of communities to address animal welfare issues themselves.

The programme provided desperately needed rescue, treatment, and sterilisation services to prevent the unnecessary suffering of vulnerable pagoda animals. Community engagement is also a key component, to improve care of these pagoda animals while also striving to reduce the dumping of animals in the first place. A training programme was developed to empower monks, nuns, and local caregivers at project pagodas to provide better animal care. Through effective procedures such as spay/neuter and community education, we hope to reduce the number of animals falling victim to the horrific dog meat trade. 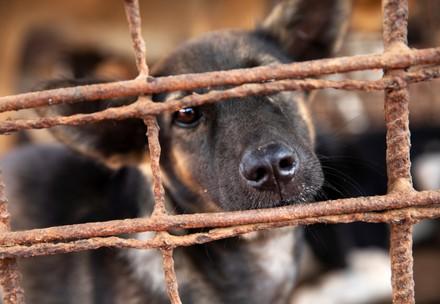 Saved from slaughter in rural Cambodia, Rashi represents the many dogs killed for meat in Southeast Asia. 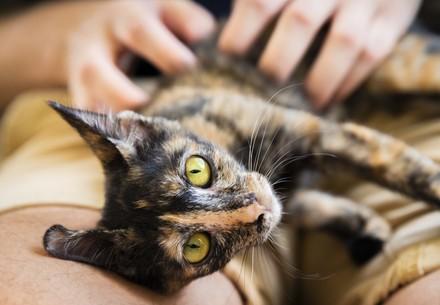 Found as a malnourished little kitten on the streets of Cambodia 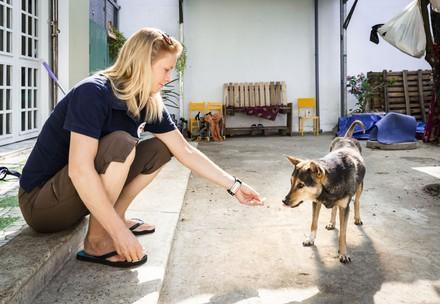